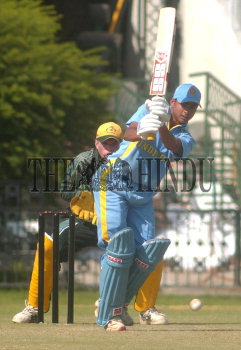 INDIA UNDER-19 MATCH AT MOHALI

Caption : India Under-19 Captain Ravikant Shukla drives a ball as wicketkeeper Ben Gledhill looks on during the first one day cricket match against Australia at Mohali, Chandigarh on September 19, 2005. India won the match by two wickets. Photo: R. V. Moorthy