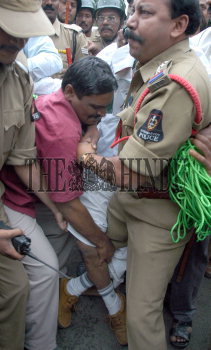 Caption : Saifabad Inspector of Police, K.V. Ram Narasimha Reddy tries to extricate himself from the vice-like grip of Manoj Alexander (not seen) of the Priyanka Rahul Gandhi Brigade near the new MLA quarters in Nibdat in Hyderabad on September 19, 2005. The protesters wanted to carry a medical test on Union Minister, A. Narender, following his provocative statements. The police officer was rescued after some anxious moments. Photo: H. Satish .