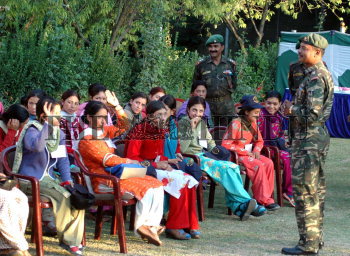 Caption : Amry Officers interacting with group of women from Ladakh in Srinagar, before leaving on tour of Agra, Delhi and Jaipur on September 19, 2005. Thirty two selected Women Empowerment Centre trainees of the Batalik Region in Ladakh undertake tour from 20th September to 2nd October 2005. The tour was organised by Army under operation Sadbhavana. Photo: Nissar Ahmad