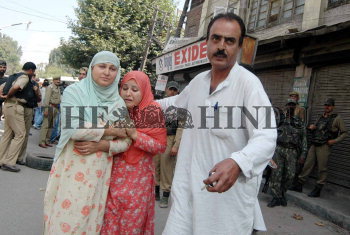 Caption : Family members resqued from the site of encounter at Shatrashahee, in Srinagar, on September 08, 2005. Two militants and one Police personnel were killed and three security jawans were injured during the long gun battle. Photo: Nissar Ahmad