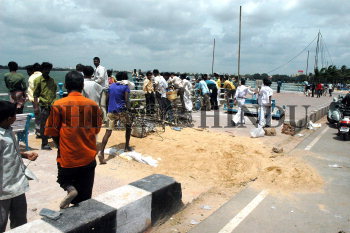 Caption : The tonnes of iron remains of Ganesh IDOLS being collected by rag pickers from the Tank Bund to be sold as scrap later. Heaps of Ganesh IDOLS were found on the banks of the Hussain Sagar Lake in Hyderabad on September 18, 2005. After the grand finale, the lake presented a sorry picture as the IDOLS are yet to immerse totally. The lake is being subjected to arsenic dumping after the 10 day festivities. This lake which is more than four centuries old, is said to have shrunk due to the immersion of IDOLS. Photo: Mohammed Yousuf.