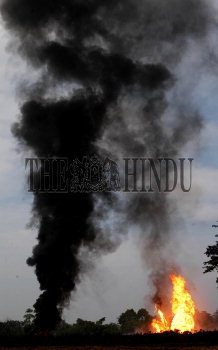 Caption : Smoke comes out from another oil well near by the oil well no.15 of Oil India Limited at Dikom in Dibrugarh district of Upper Assam on Sunday, September 18, 2005. The oil well no.15, which has been on fire since last four continuous days and the temperature had risen to over 2000 degree celsius. Oil spillage spread to the three sections of the Dikom tea estate belonging to Rossell Group affecting tea plantations in an area of 20 hectare, besides affecting tea leaf manufacturing. American fire experts from the world famous fire fighting company Boots and Coots is putting their best efforts to douse the fire and killing the blazing well. Photo: Ritu Raj Konwar.