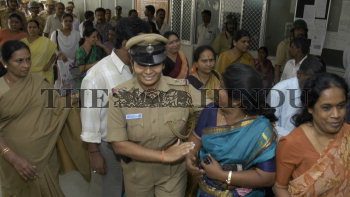 PROTEST AGAIST THE NEW DIRECTOR OF SMALL SAVINGS A

Caption : Staff staged a protest against K.A. Nagaraj, the new Director of Small Savings and Lottery, Government of Karnataka, who took charge Bangalore on September 17, 2005. The office to conduct lottery was locked by them with the key missing. They were arrested by the police and removed from the spot. Photo: K. Gopinathan.