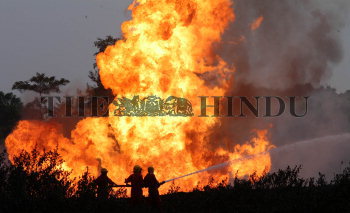 Caption : Fire fighters trying to extinguish the fire at a Oil well of Oil India Limited at Dikom, 520km east of Guwahati city in Upper Assam on September 16, 2005. The oil well which is in fire since yesterday morning will take more time to douse the fire. More fire experts and fire fighters have been called from out side Assam to take control of the situation. There is no causalty so far but a large number of villagers have been evacuated residing near by the Oil well. Photo: Ritu Raj Konwar