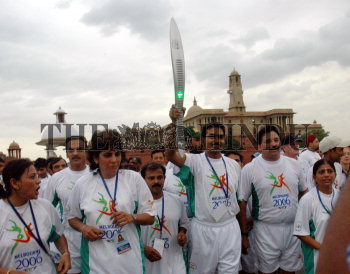 Caption : Bahadur Prasad along with others running the Queen's Baton in New Delhi on September 14, 2005. The baton is being carried through all the Commonwealth countries before reaching Melbourne, the venue of the Commonwealth Games in March next year. Photo: Sandeep Saxena