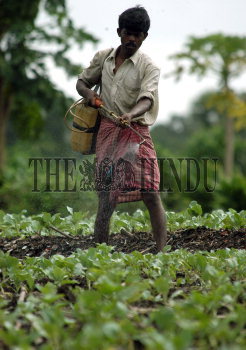 Caption : A farmer is spraying PESTICIDES at a farm on the outskirts of Kolkata. Indian PESTICIDES market is the twelfth largest in the world with a value of US$ 0.6 billion, which is 1.6 percent of the global market pie. However, per hectare consumption of PESTICIDES in India is very low at 0.55 Kilograms when compared to developed countries. The largely populated country, which is mainly dependent on agriculture, consumption in PESTICIDES is expected to increase in the future, thus offering a good potential for the players both domestic and overseas in coming years. Photo: A. Roy Chowdhury