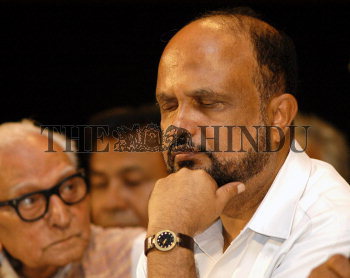 Caption : Former Assam Chief Minister, Prafulla Kumar Mahanta seems to be in deep thoughts while attending a two-day long political convention in Guwahati on September 14, 2005. Mahanta and his loyalists mooted the formation of a new political party, as they were suspended from the Asom Gana Parishad (AGP). Mahanta who is the founder member of AGP is still claiming to get back the present AGP party symbol of `Elephant'. Photo: Ritu Raj Konwar