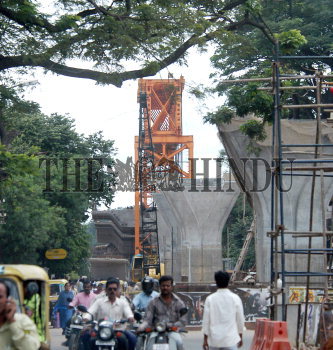 Caption : A view of the flyover under construction at Anand Rao Circle in Bangalore on September 12, 2005, where an estimated over 20,000 vehicles pass through the junction every hour. Bangalore Development Authority has taken up the project at a cost of Rs 27.6 crores, which it expects to complete before November 14. Worsening infrastructure, especially the pot-holed roads coupled with increasing traffic congestion every day had recently prompted the industrial units to threaten boycott of the upcoming mega technology event Bangalore IT. in 2005. Work on the Airport Road, which started over an year ago had stopped over payment issue. BDA has taken over the project from UP State Bridge Corporation and is expected to complete the project next year. Photo: G.R.N. Somakhekar