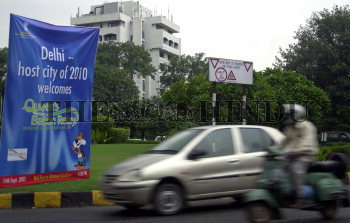 Caption : A scene at the Andhra Bhawan roundabout displaying the banners for the Melbourne-bound Queen's Baton Relay in New Delhi on September 12, 2005. The baton is being carried through all the Commonwealth countries before reaching Melbourne, the venue of the Commonwealth Games in March next year. Photo: Rajeev Bhatt