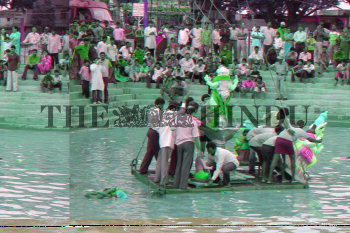 Caption : Cranes being used to immerse large Ganesha IDOLS in the makeshift pond in Ulsoor lake premises in Bangalore on September 11, 2005, which is the fifth day after Ganesh Chathurthi. Many people, after immersing the IDOLS kept in their houses, are watching the new mode of immersion. Photo: V. Sreenivasa Murthy