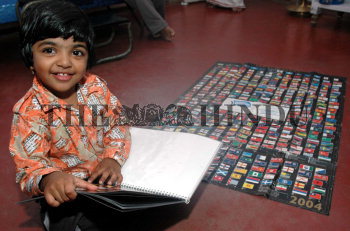 Caption : Three-years-old Shrinidhi of Thiruvananthapuram is very different from other children of her age. She can identify flags of over 200 countries. A hard task even for an adult but for Shrinidhi, it is child's play. Shrinidhi's hobby has a name. It is called vexillology. A vexillologist is an expert on flags or ensigns, which is another synonym for flag. Her parents have introduced her to some vexillological associations around the world. Michel Lupant, a Belgian vexillologist, presented a world flag chart to Shrinidhi and since then, she has been engrossed in it. Her parents have also got in touch with the Flag Institute at York in England. Photo: S. Gopakumar 10-9-2005