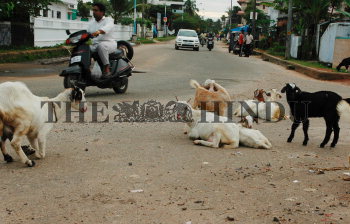 Caption : Goats seem to have taken over the Subhash Bose Road in Kochi which became free of traffic on September 8, 2005, following the stir called by transporters to protest against the hike in fuel price. Photo: Vipin Chandran