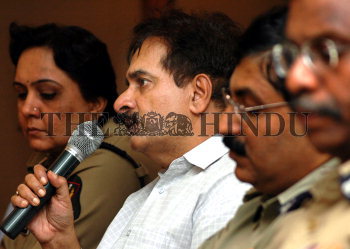 Caption : The Hyderabad Police Commissioner, V. Dinesh Reddy (second left), briefing the media in the city on September 8, 2005 about the security arrangements made in Hyderabad and Cyberabad for the nine-day celebrations of Ganesh festival. (From left) The Additional Commissioner of Police (Coordination), Tejdeep Kaur Menon, the Police Commissioner of Cyberabad, M. Mahender Reddy and the Additional Commisioner of Police (Traffic), A.K. Khan, are also seen. More than 23,000 policemen have been put on duty as part of the security arrangements. Photo: Mohammed Yousuf