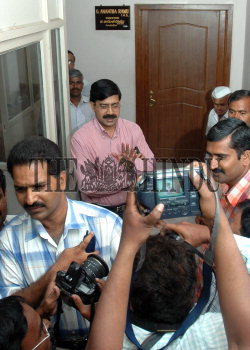 THE IAS OFFICER WHO WAS ARRESTED

Caption : G. Anantaramu, (pink shirt), Director of Technical Education, coming out after the Anti-Corruption Bureau conducted a raid at his office at BRKR building in Hyderabad on September 6, 2005. The IAS officer, who was arrested by the customs officials at Rajiv Gandhi International Airport in Begumpet with 21 lakhs cash before boarding a flight to Bangalore. Photo: Mohammed Yousuf