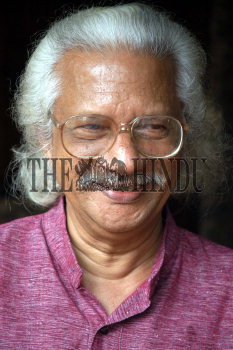 Caption : The seasoned Malayalam filmmaker, Adoor Gopalakrishnan, at his residence in Thiruvananthapuram on September 6, 2005. He has been awarded the Dada Saheb Phalke Award for 2004 in recognition of his outstanding contribution to Indian cinema. He will be conferred the award at the National Film Awards ceremony later this year. Photo: C. Ratheesh Kumar