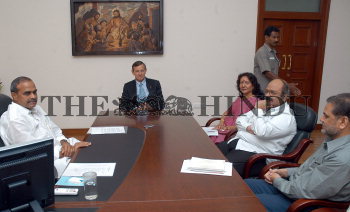 Caption : Frank Elbe (second left), Indian representative of Volkswagen AG and former German Ambassador to India, at a meeting with the Andhra Pradesh Chief Minister, Y.S. Rajasekhara Reddy (ext left), the Andhra Pradesh Minister for Tourism, J. Geeta Reddy (third left) and other officials in Hydberabad on September 6, 2005. Frank Elbe was here to hand over a cheque for Rs. 11.67 crores to the Andhra Pradesh Chief Minister for covering the damages the State Government had suffered by investing in a fictitious special purpose vehicle, Vashishta Wahan, on the instructions of a former executive of Volkswagen. But, the Chief Minister refused to accept the money citing that the Central Bureau of Investigation (CBI) was investigating the matter. The Chief Minister appreciated the Volkswagen's gesture in accepting moral responsibility for the damage. Photo: H. Satish