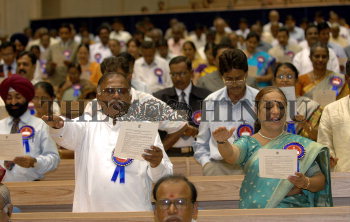 Caption : Teachers being administered a ten-point oath by the President, A.P.J. Abdul Kalam (not in picture), at the Teachers' Day function (birth anniversary of Sarvapalli Radhakrishnan) in New Delhi on Sepetmber 5, 2005. The President gave away the National Awards to teachers for the year 2004 at the function. Photo: Sandeep Saxena