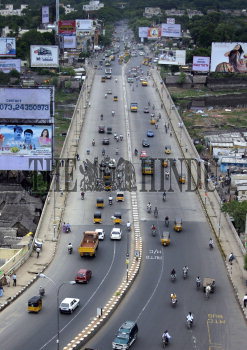 Caption : The ever-crowded Maraimalai Adigalar Bridge, in Saidapet, wore almost a deserted look with a few private operators plying. The one day bus strike called on by seven trade unions of the Metropolitan Transport Corporation on August 31, 2005, brought hardship to the commuters at many places in Chennai. Photo: M. Vedhan