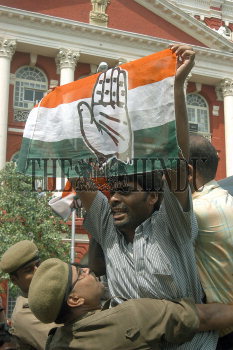 Caption : The Congress supporters are protesting against the ban of hand-pulled Rickshaw in front of Writers Building in Kolkata on Monday, August 29, 2005. The State Government has planned to ban the hand-pulled Rickshaw on humanitarian grounds. The rehabilitation of thousands of rickshaw pullers is also under consideration. Photo: Arunangsu Roy Chowdhury