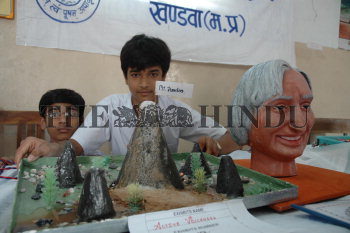 Caption : Tabish Khan, student from Kendriya Vidyalaya, Khandwa in Madhya Pradesh creating a model of active Volcanoes in Canada and the statue of President A.P.J. Abdul Kalam in a two-day Regional Social Science Exhibition organised at Kendriya Vidyalaya in Bhopal on August 25, 2005. The theme of the exhibition is Tamil Nadu and Canada. About 400 students from eight regions of Kendriya Vidyalaya having 52 schools are participating in the exhibition. Photo: A.M. Faruqui