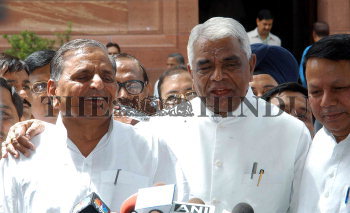 Caption : Chief Minister of Uttar Pradesh, Mulayam Singh Yadav ( left) and Chief Minister of Madhya Pradesh, Babulal Gaur are jointly addressing the Media after signing a Memorandum of Understanding for preparing a `Detailed Project Report' on the Ken-Betwa River Link Project at the Parliament House, in New Delhi on August 25, 2005. The Ken-Betwa link is an inter-linking of rivers programme benefiting the two States. Priya Ranjan Das Munshi is also seen in the picture (at right). Photo: V. Sudershan