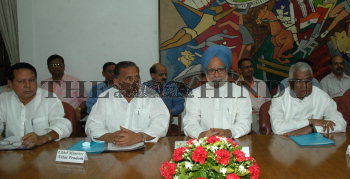 Caption : The Prime Minister Dr. Manmohan Singh and the Chief Minister of Uttar Pradesh, Mulayam Singh Yadav during the signing of Memorandum of Understanding with Madhya Pradesh Chief Minister Babulal Gaur (not in the picture) for preparing a Detailed Project Report on the Ken-Betwa River Link Project at the Parliament House, in New Delhi on August 25, 2005. The Ken-Betwa link is an interlinking of rivers programme benefiting two States. Also seen is Water Resources Minister Priya Ranjan Das Munshi (left). Photo: V. Sudershan