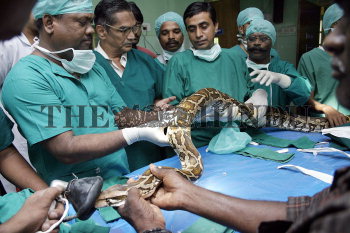 Caption : Doctors examining the Indian Rock Python brought from the Madras Crocodile Bank for an abscess removal operation at the Madras VETERINARY College HOSPITAL at Vepery in Chennai on August 23, 2005. Surgeons at Madras VETERINARY College successfully removed the abscess. The surgery, including the anaesthesia, took about an hour and was conducted by a team of doctors headed by Dr. Ameerjan, Director of Clinics, Tamil Nadu VETERINARY and Animal Sciences University (TANUVAS). The 10-foot-long reptile weighing 10 kg had a large abscess in the second quarter of its body. It was in the python's body for one and a half years. Photo: M. Vedhan