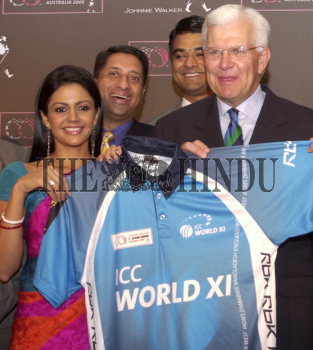 Caption : Malcolm SPEED, Chief Executive Officer, International Cricket Council (ICC) and Mandira Bedi, along with the sponsors of the Johnnie Walker Super Series, unveiling the official uniform of the ICC World XI in New Delhi on August 22, 2005. The Super Series cricket matches are to be played between Australia and ICC World XI in Australia. Photo: Rajeev Bhatt