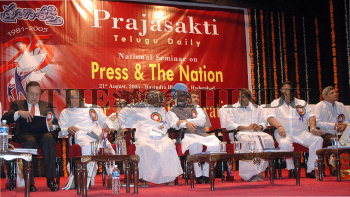 Caption : The Prime MINister, Manmohan SINgh (seated fourth from left), at the national semINar on "Press and the Nation" as part of the silver jubilee celebrations of 'Prajasakti', the Telugu Daily, IN Hyderabad on August 21, 2005. Others are (from left) N. Ram, EDITOR-IN-CHIEF, The HINdu, S. Jaipal Reddy, Union MINister for INformation and BroadcastINg, Koratala Satyanarayana, CPI (M) leader and Chairman of Prajasakti Sahiti Samastha, Y.S. Rajasekhara Reddy, CHIEF MINister of Andhra Pradesh, Dasari Narayana Rao, Union MINister of State for Coal and MINes and Sitaram Yechury, Polit Bureau member of the CPI (M). Photo: P.V. Sivakumar