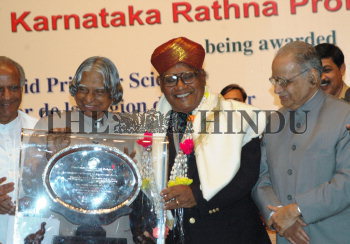 Caption : The President, A.P.J. Abdul Kalam, felicitating Chintamani Nagesh Ramachandra Rao (C.N.R. Rao) (second right), at the Indian Institute of Science in Bangalore on August 20, 2005. Also seen are the Deputy Chief Minister of Karnataka, M.P. Prakash (ext left) and the Karnataka Governor, T.N. Chaturvedi (ext right). The Linus Pauling Research Professor at Jawaharlal Nehru Centre for Advanced Scientific Research and Honorary Professor at the Indian Institute of Science, Prof. C.N.R. Rao was honoured for being awarded the Dan David Prize for Science in the Future Dimension (material science) from Israel, the first India Science Award from the Government of India, the Chevalier de la Legion d`Honneur from the President of France and the Chemical Pioneer Award from the American Institute of Chemists. He was also awarded the Karnataka Ratna Award by the State Government. Photo: K. Gopinathan