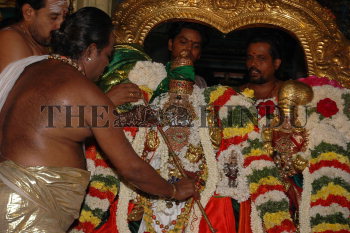 Caption : Priests placing the silver sceptre near Lord Sundareswarar (Lord Shiva) during the enactment of the coronation of the Lord at Sri Meenakshi Sundareswarar Temple in Madurai on the evening of August 14, 2005. The coronation is enacted during the Tamil month of Aavani (August-September) and this festival is one of the major attractions at the temple. Photo: S. James