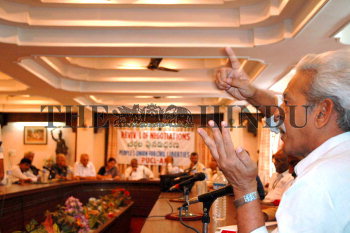 Caption : Revolutionary poet and former emissary of CPI (Maoist), Varavara Rao, raises a point during a conference on 'REVIVAL of Negotiations', which was chaired by APCC president K. Keshava Rao, in Hyderabad on August 14, 2005. Photo: Mohammed Yousuf