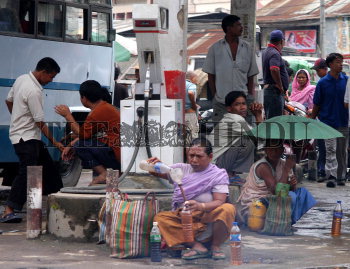 Caption : Manipuri women sell petrol in black in a petrol pump in Imphal city, on August 09, 2005. Manipur has been gripped by a shortage of petrol and diesel due to the ongoing economic BLOCKADE which entered 51st day. Only two litres of petrol being given to a two wheeler and five litres to a four wheeler at the interval of three days. In grey market, petrol being sold at Rs.80 per litre and diesel at Rs.40 per litre. Photo: Ritu Raj Konwar