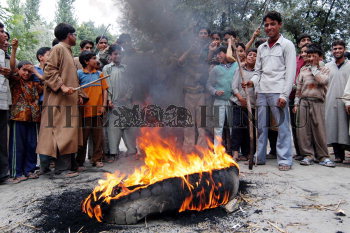 Caption : Villagers of Sopore are protesting against the Supreme Court verdict in upholding the death sentence for one of the four accused in the December 2001 Parliament Attack Case, Afzal Guru at Sopore on August 08, 2005. Photo: Nissar Ahmad