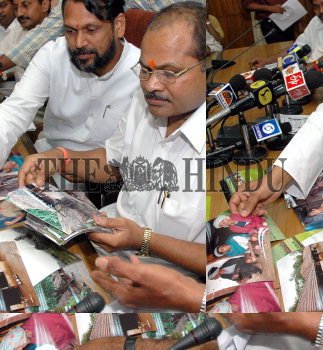 Caption : Politics of death: The Congress Legislature Party (CLP) leaders displaying photograps of tribals from agency area near Visakhapatnam before the media in Hyderabad on August 07, 2005. Telugu Desam Party listed 44 deaths in agency area, in a list released after party president N. Chandrababu Naidu visited the region affected by malaria . But according to the National Vector Borne Disease Control Programme which sent a fact finding team, it was found that out of 44 deaths listed by TDP, all except one are alive and present in the village. Photo: Mohammed Yousuf