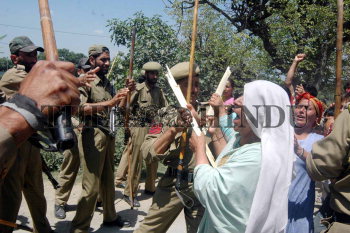 Caption : People registering their strong protest against the kidnapping and subsequent killing of a seven year old girl (Hami), who they say was murdered after being raped at Mahjoor Nagar in Srinagar, on August 06, 2005. Unidentified assailants had slit the throat of Hami, daughter of one Ghulam Mohiuddin Dar, packed her body in a gunny bag and dumped it in a SEWER from where it was retrieved last night. The girl was reported missing on July 31 and was last seen playing with other kids in the locality. Photo: Nissar Ahmad