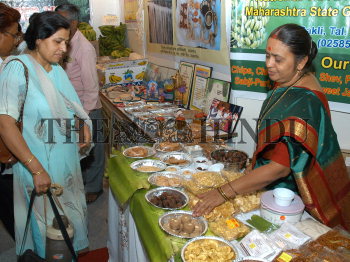 Caption : A banana product stall at the 'Banana Festival' held at Pragati Maidan in New Delhi on August 04, 2005. More then 60 varieties of bananas will be on display at the festival which runs from 04th to 06th August 2005, and showcases India's banana industry, the largest producer in the world with an estimated production of some 16 million tonnes per year. Photo: Shanker Chakravarty