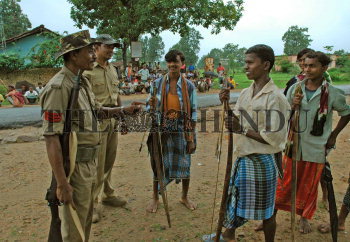 Caption : Security personnel talking with local youth armed with BOWS and arrow in a village in Dantewada district on August 03, 2005. There is a movement named ‘Salwa-Judoom’ (Peace Movement) has picked up its momentum against naxal activities in the villages of Bastar region and villagers are asking the government to provide arms and ammunition to combat the Maoist rebels. Photo: Akhilesh Kumar