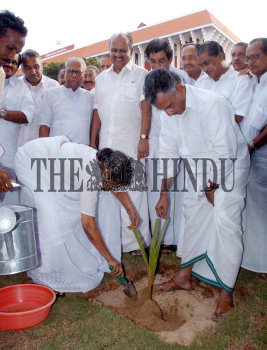 Caption : Veteran politician K.R. Gouri gets the privilege of planting a sapling before the Legislative Assembly complex in Thiruvananthapuram on August 02, 2005, in recognition of her long years' of service as a legislator . Seventeen other senior legislators also were accorded the honour of having a tree each growing in his or her name in the sprawling compound of the Assembly complex. The Kerala Assembly Speaker, Therambil Ramakrishnan, the Chief Minister Oommen Chandy and the Opposition leader, V.S. Achuthanandan are among those in the picture. Photo: C. Ratheesh Kumar