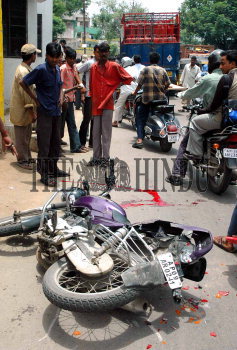 Caption : A couple travelling on two-wheeler met with an accident near Praga Tools at Musheerabad in Hyderabad on August 02, 2005. The motorbike on which they were travelling was hit from behind by a lorry carrying gas cylinders. The woman sustained serious head injuries and was rushed to hospital by locals. Police reached the spot at least an hour after the incident. Photo: Mohammed Yousuf