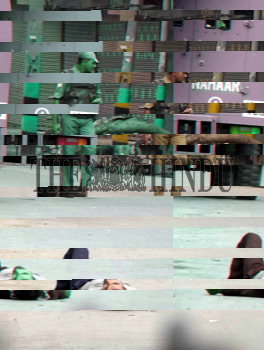 Caption : A CRPF jawan standing near the injured suspected militant, in Down Town Srinagar on August 01, 2005. Army Personnel chased two Kashmiri youth riding a motorcycle one of them was captured. Eyewitnesses said that policemen dragged one of the young men riding the motorcycle and bludgeoned his head with a brick before whisking him away in an armoured truck Photo: Nissar Ahmad