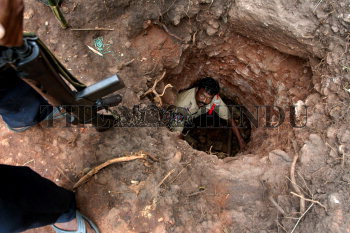 Caption : A policeman emerging out of the tunnel dug by illegal miners after carrying out a search operation on August 1, 2005 following reports of an accident on July 31, 2005 night claiming several lives at Karaka Hills in Golugonda Mandal in Visakhapatnam district. The illegal quarrying for semi-precious stones is a regular occurence in the agency (tribal) tracts of Visakhapatnam and East Godavari districts.- Photo: K.R. Deepak 1/08/2005