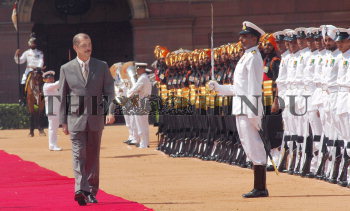 Caption : James Alix MICHEL, President of Seychelles, taking the guard of honour at the ceremonial reception accorded to him at the Rashtrapati Bhavan in New Delhi on August 01, 2005. Photo: Anu Pushkarna