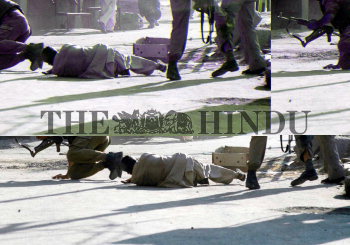 Caption : A police cop beating an old Kashmiri when he protested the killing of two militants who fought a 24 hour gunbattle with the security forces in Lal Chowk at Srinagar on July 30, 2005.Two Militants and two soldiers were killed and 19 people were wounded during the encounter. Photo: Nissar Ahmad