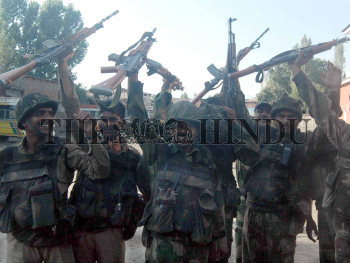 Caption : BSF soldiers shouting pro-Indian slogans after killing the two militants during the 26 hour long gunbattle in Lal Chowk at Srinagar on July 30, 2005.Two militants and two soldiers were killed and 19 people were wounded during the encounter. Photo: Nissar Ahmad