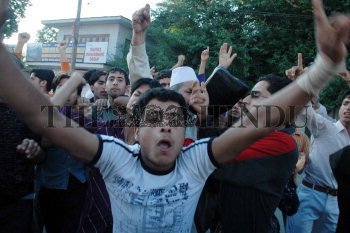 Caption : Kashmiri Muslims shout pro-freedom slogans after the killing of two 'fidayeen' (suicide squad members) in the gunfight between security forces and militants lasting 24 hours in Lal CHOWK, Srinagar, on July 30, 2005. In the encounter two security force personnel got killed and 24 persons, including seven journalists were wounded. Photo:Nissar Ahmad