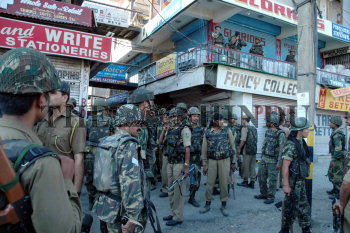 Caption : BSF soliders standing near the building in which one militant was killed during the 24 hour long gunbattle in Lal CHOWK, Srinagar, on July, 30, 2005. In the encounter two security force personnel got killed and 24 persons, including seven journalists were wounded. Photo:Nissar Ahmad