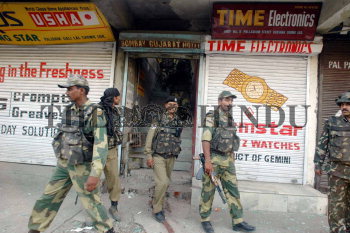 Caption : BSF soldiers standing near the building in which one militant was killed after the 24-hour gunbattle in Lal CHOWK Srinagar onJuly 30, 2005. In the encounter two security force personnel got killed and 24 persons, including seven journalists were wounded. Photo:Nissar Ahmad