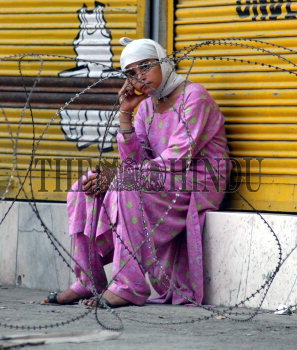 Caption : Militants hold up in two buildings on a busy street in the main Kashmir city of Srinagar fired and pushed back security forces as they tried to raid one of the hideouts on July 30, 2005, a day after the miltants exploded grenades and triggered a gunfight that killed two soldiers and wounded at least 19 persons. A Kashmiri girl watching a gun battle between Security Forces and the militants. Photo: Nissar Ahmad