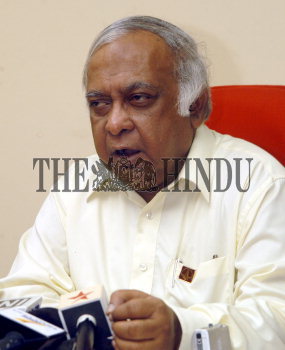 Caption : Mr. Subir Raha, Chairman, Oil and Natural Gas Corporation (ONGC), addressing a press conference in Mumbai on July 28, 2005. Mr. Raha said a committee of former ONGC chairman and directors has been constituted to inquire into the causes of the fire accident that destroyed the Bombay High North oil platform of ONGC on July 27. Photo: Paul Noronha